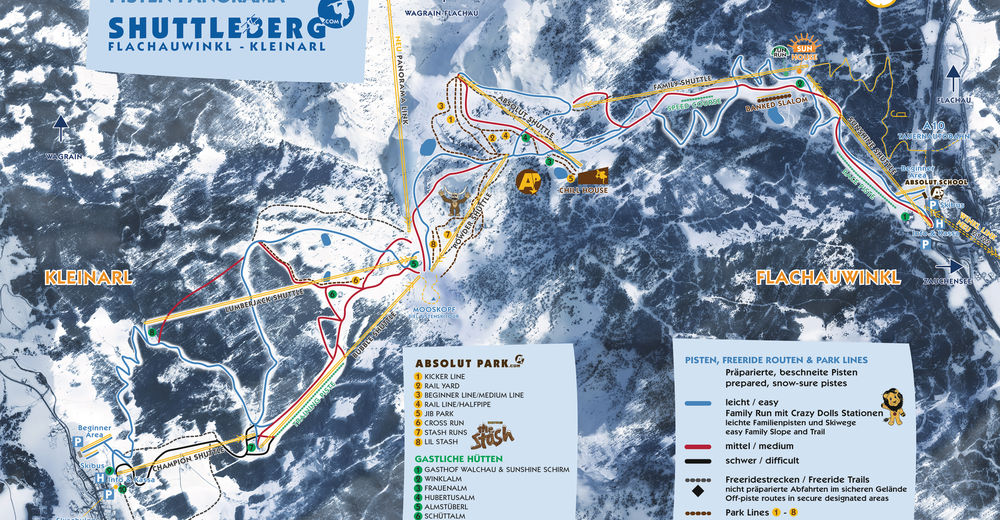 AWAY for sporty families is written in capital letters here.

Action-packed special pistes, easy, wide family pistes, natural ski routes and snow parks for beginners and advanced skiers: on the Shuttleberg, winter sports enthusiasts can not only ski top-prepared pistes, but also discover something new in a playful way. There are many highlights for families on a total of 40 kilometres, e.g.:

But it's not just the slopes that are diverse here, the team is colourful too: Shuttle Mountain is proud to employ staff from many different nations and offer them challenging and secure jobs. The different languages and cultures are an enrichment, both for the company and its guests.

Unique facilities for snowboarders and freeskiers.

The Absolut Park on Shuttle Mountain is one of the largest snow parks in the world. Freeskiers and snowboarders can let off steam on a huge area with around 100 perfectly shaped kickers, boxes and rails. The park has separate areas for beginners, advanced riders and pros, so that children and young people can slowly and safely get to grips with the freestyle sport.

The Chill House at the foot of the Absolut Park is a popular meeting place for snowboarders and freeskiers - for relaxing, bouldering or skating in the Mini Ramp.

*All the amenities of a modern ski resort.

There are exclusively modern, comfortable chairlifts on the shuttle mountain. Each lift has at least two groomed runs, and there are also some natural freeride routes.

The Shuttleberg has its own motorway exit in Flachauwinkl (A10, Tauern motorway) and in Kleinarl the valley station is directly at the entrance to the village. In addition, free ski buses run at short intervals to Flachauwinkl and Kleinarl.

The shuttle mountain facilities in brief:

One ticket - 760 kilometres of slopes.

The Flachauwinkl - Kleinarl shuttle mountain is located in the centre of Ski amadé, Austria's largest ski association. Multi-day ski passes are therefore valid for five top ski regions and 760 well-maintained kilometres of pistes in Salzburger Land and neighbouring Styria - an added bonus for skiers and snowboarders who like to make kilometres.