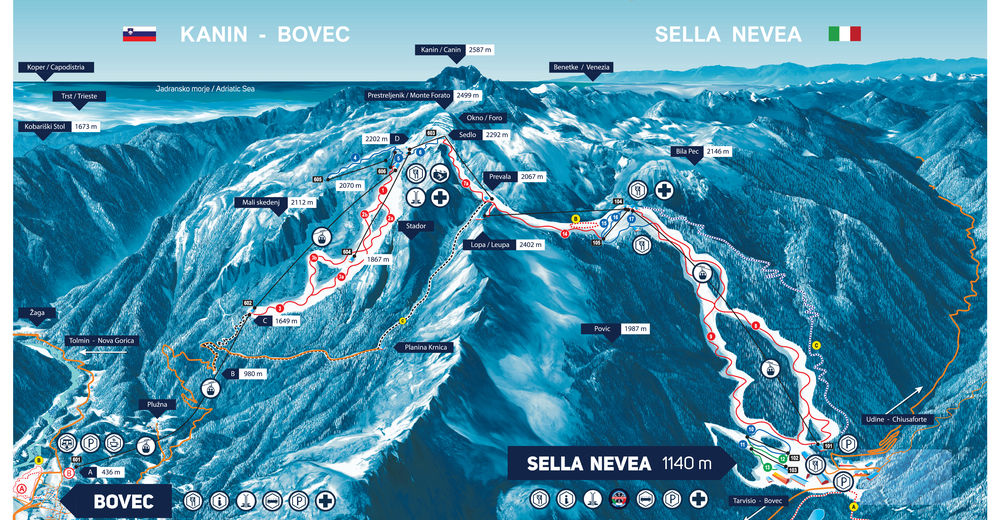 The peaks above Bovec are usually well covered with snow in December and this is the time when the long skiing season begins on Mt. Kanin, the only ski center in Slovenia that can boast ski slopes above 2,000 m.

Kanin is a typical Alpine ski center: due to the altitude, the pistes seldom freeze, offering quality skiing on exclusively natural powder snow during most of the winter and enabling skiing far into the spring, very often up to the first half of May. This is the winter part of a fairytale in the heart of the Slovenian Alpine region, in the southeastern part of the Alpine chain and close to Adriatic Sea. Another special feature of the Kanin ski center is its sunny position and magnificent views far into the heart of the Alps to the east and towards the Gulf of Trieste to the south.

BOVEC, famous throughout the world for the marveolus Soča River, is also a genuine Alpine centre, despite its low altitude. Its special position and the valley opening down toward the Adriatic Sea give it a special charm and diversity seldom found elsewhere. The influance of the nearby Adriatic Sea is manifested in rather mild winters in the Bovec Basin. The mean temperature in Bovec in January is -0.2°C. It is interesting that in the 1960s there was an average of 20 days of snowfall in the valley and 75 on Mt. Kanin. Lately, snow on Christmas is rather an exception in Bovec, while Kanin still offers skiing during the Christmas holidays (although the quantity of snow is somewhat decreasing in general).

The new Prevala four-seat chairlift (built in the 2005/06 ski season) represents the first step toward the realisation of an idea to connect the Kanin ski center with Sella Nevea, a ski resort on the Italian side of the mountain. The dream of tourists and ski enthusiasts will come true during the 2009/10 season, when one ski pass will enable skiing on both sides of the mountain.